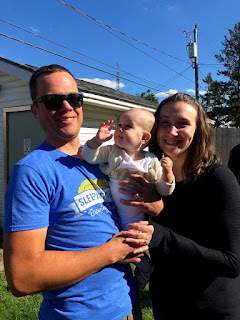 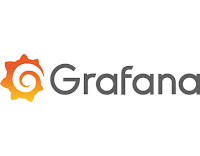 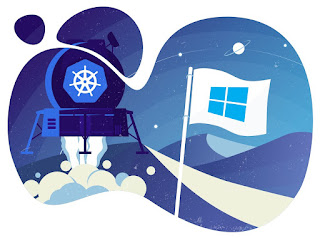 This past week, I participated in a conference at the Kalahari Resort, in Sandusky, Ohio. CodeMash is an annual developer conference. Judging by the speakers and participant volume, it seems to be one of the better attended and organized technical conferences in the midwest. My company sent myself and 5 of my friends to the conference to learn about and bring back new ideas which could improve our team. We traveled together, ate together, went out for beers together, and learned a crap ton. This post will summarize what I thought were some of the most important themes, tools, and ideas that I encountered.

As a quality champion attending what I thought was a developer-focused conference, I kind of expected to encounter mainly development talks and workshops. But turns out the beauty of CodeMash, is that at its' nature, it caters to all types of technologists. This year's tracks included Architecture, Data (big/small/otherwise), Design (UI/UX), DevOps, Enterprise/Large-Shop Development, Hardware/IoT, Mobile, Programming Principles, Project Leadership/Soft Skills, Security, Software Quality, Web/Front-End. I found myself focusing on Software Quality, Security and the DevOps tracks, with a few other session types sprinkled in. But it was refreshing to see all aspects of the SDLC represented, pushing the idea of a true cross-functional technologist forward.

This session was conducted by Brian King and focused on tools which could help developers and QA persons discover penetration testing. Brian did a really great job of differentiating what functional vs. Pentesting was and then went on to guide us through some common approaches to pentesting, using free tools. He walked us through example tests and drilled the idea home, that essential pentesting approaches can be carried out not only by specialists (like himself) but also by pentesting noobs (like me). I walked away with tools and approaches which I am excited to bring back to my team. 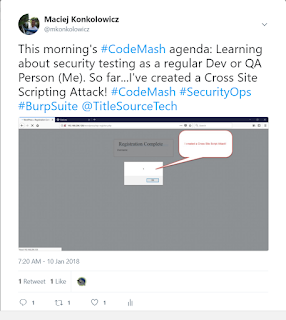 This session was conducted by Stephen Shary and focused on testing NGINX when it is implemented as a reverse proxy. I was honestly blown away by this session, not only because it was really well conducted, but because it introduced the idea of integration tests to testing the NGINX configuration. Stephen works for Kroger Technologies (yea, the grocery chain!) and ran into a problem, with testing his infrastructure. NGINX setup focuses on the premise of a configuration file(s) which specify the routing of traffic through the appliance, to the web applications which sit upstream of it. Stephen's teams maintained the configuration file in source control but ran into mega issues when changes were made and checked in. This caused him and his team to look for and eventually develop an open source integration testing framework called SnowGlobe. 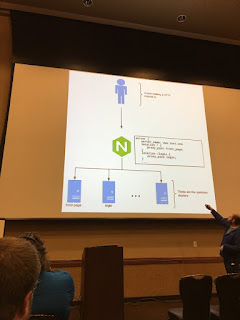 The value of the framework is that when deployed, it mimicks upstream dependencies, effectively mocking your web apps, while running tests against your NGINX configuration(s). The framework comes wrapped in a nice docker container and is able to be integrated into a continuous integration flow quite easily. During the session, Stephen demonstrated how tests could catch erroneously checked in configuration changes, such as a poorly configured re-direction. Stephen's team is eager for other teams to adopt the framework and add to it, so he has extended an offer to help with teams trying it out. Watch out Stephen, our team is pretty eager to get some tests running! 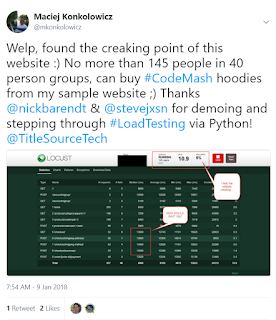 This process was really awesome to walk through as it covered the full spectrum of what an engineer interested in performance would have to do. I've been to many workshops focused on writing tests, which do not give you an idea of the work necessary before any tests are written. Steven and Nick did an awesome job giving us the tools necessary to truly establish a load testing environment and run various degrees of difficulty of load tests. It was challenging, but due to crystal clear instructions in their Github repo, I did not have a problem completing the exercises. 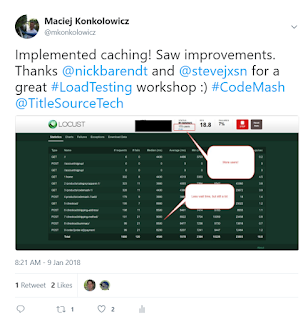 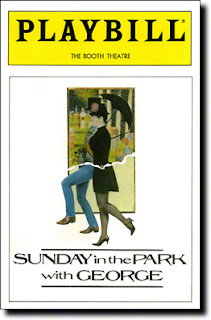 Due to unanticipated unfavorable weather forecasts, this was the last talk I saw at CodeMash 2018. But what a talk it was. Any time you get the chance to listen to one of the software industry's gurus, you just go. I must admit, before this talk, I was a bit skeptical, but I knew that if I had the chance to see Jon Skeet talk about anything relating to software, I should.

I was not disappointed. Jon's talk was one that I think transcended the traditional boundaries of technical, or soft skill talks which I encountered at Code Mash. Jon spoke of software and compared it to his favorite musical, "Sunday In The Park With George", by Stephen Sondheim. Jon talked about all types of lessons leading to the idea that developing systems, is similar to writing a play. He supported this by exemplifying design, composition, and light and drawing parallels to craftsmanship in both disciplines.

Listening to Jon Skeet speak of the SDLC, was less of a lecture, but more of a sermon. His passion for the higher ideals of craftsmanship and passion shone through above else, and really inspired the rest of us to think along the same ways. I was blown away by his ability to translate his experiences and make them relatable to our individual struggles.

This was my first time being at Code Mash, and I am excited to say I think I found a gem of a conference. Anyone who's ever been has told me it's pretty great, and now I can confirm it as so. I will be back, and in the future, I'll bring more of my family :) 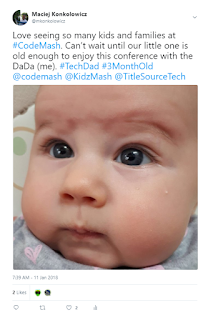